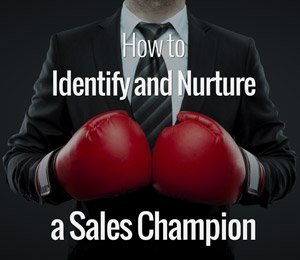 In our last article, we talked about how to discover real pain points – ones that will drive customers to take action.

Today, we want to talk about Champions – the people in your accounts that drive the projects meant to solve these pains.

A Champion is the person within your client’s organization that will sell on your behalf when you’re not there.

They will guide you through the decision making process, introduce you to key players and decision makers, and alert you when things go wrong.

They are probably the most important person in your sales campaign, and they’ll fight hard for your cause.

So, how do you identify the right potential champions? And how do you discover what’s driving them, so you can build them up and leverage their power and influence?

The power of a Champion

A few years ago, I was working on a very large opportunity. We had a unique offering and were convinced that we had a good chance to win the deal.

Pretty late in the cycle, I got the following SMS from the VP of Operations at our client’s organization:

Rizan, in board meeting right now. Other members leaning towards your competition, who says they can do the same for less money. They are coming in 1 hour to present. Ideas? – Paul

I felt my pulse rising. We have been working too hard on this account and now we were close to losing? I couldn’t let that happen.

So I called up my product-marketing guys and asked them for everything they knew about the competition’s offering. They rushed me the information and I texted Paul back.

With two well-placed questions that showed the pitfalls of going with the competition, he knocked the competition out of consideration and convinced the board to go with us.

If it hadn’t been for Paul, it’s very likely we would have probably lost the deal (or sold it with a huge discount).

But he didn’t just SMS me out of nowhere. He and I had been working together for months to make this deal.

In other words, I had been enabling and nurturing Paul to become this deal’s Champion.

Like Paul, a Champion informs you the moment things go wrong so you have a chance to react in time. They give you insight and guidance on how to best run your campaign and influence the internal decision process.

Without a solid Champion, understanding your client’s pain and accessing the key decision maker’s become much more difficult. Great salespeople know that and actively look for allies at their prospects they can build to champions.

The question is, how do you find a Champion, and, more importantly, how do you convince them to support you?

How to identify a potential champion

From the moment a lead turns into an opportunity, you need to start searching your account’s organization for the right Champion.

But where do you start?

There are two main things to look for when doing looking for a Champion:

Champions have a personal interest to drive your deal

In order for a Champion to be motivated to help you, there must be a personal benefit. Most probably they are suffering from the pain you discovered or have been assigned by management to solve it.

Champions do have power and influence to drive your deal

A person helping you through the mists of decision-making, introducing you to the right people must be a well positioned, respected and connected individual.

Let’s to go into each in more detail:

Discovering the personal interest of your Champion is in many ways crucial to the success of your campaign. It allows you to understand the personal motivation of solving a pain.

Personal interest could be goal oriented: to achieve something like beating an internal competitor, a promotion, recognition for their department or monetary incentives.

However, they could also be driven by fear: preventing a job loss, competitive pressure, budget cuts or pending reorganization ideas.

The key question is:

Does this person have something to gain if we close?

Because there is a personal element involved, it’s not easy to ask straight questions about what’s in it for them personally. If you have earned their trust by showing potential solutions to his or her pain point, Champions usually open up allow you to discover their personal motivations.

For example, a Champion I once worked with wanted to spend more quality time with his family. The problem was his company’s software was forcing him to come in to the office on weekends to manually troubleshoot the system.

When I was able to show him that our solution would automate that for him, he was sold. He ended up becaming the main driver behind that deal.

Because it’s their own personal interest, they will stand up and fight for this project and protect it against budget cuts, your competition and delays.

John, a Chief Security Officer of a large Bank, threatened his boss to resign if our security project wasn’t approved by the board. I thought this was a bold move to risk his job because of my project, but I later realized this project was make or break for him to earn respect as CSO in the bank, which he finally did.

Does your champion have Power and influence?

While personal interest is critical for you to bridge with your champion, you also have to ask yourself:

Does this person have the necessary power and influence to drive changes and help close this deal?

In my first year as a salesman, I had the chance to work on an opportunity at a large telecom provider.

I was selling access control software and my “Champion” called Peter was a senior manager of large server systems.

The exposure my prospect had on their Unix system was huge, and the pending integration of business partners made it even larger. They had a huge pain and we were a perfect fit, which we proved in a POC.

Peter’s personal interest was to secure the landscape. We had a perfect campaign, but when it came to closing the deal, it hit a snag. First weeks passed by. Then months.

Peter promised to get us the deal. But in the end, he informed me that my prospect had decided to go with another solution.

After the initial shock, I investigated and found out that Peter had a very weak standing inside the IT department. On top of that, the CIO had actually delegated the project to Peter’s internal competitor.

Peter had no power and influence.

This killed my deal, BUT it taught me a valuable lesson to crosscheck if my potential actually has the power and influence to drive the deal.

Here some hints to how to check power and influence of your potential champion:

They have a strong personality

They are goal-oriented achievers with a strong emotional IQ. They intend to be dominant characters that are very knowledgeable about what they do.

They have a strong track record

They have a good track record of successful projects, usually paired with continuous promotions within the organization.

They are well known within their organization

Due to their diverse projects, they are well known within their organization. They may not be liked, but they are well respected for what they have accomplished. In larger companies they are often part of “high talent” programs.

They have a strong network

Due to their track record of achievements they are often trusted advisors of the higher management beyond the formal hierarchy. They are seen as “change-agents” and are often picked for business critical projects.

So, how can you spot them when you meet them?

By the way they challenge you

They usually have strong character and don’t trust everybody from the beginning. They intend to stay in the back during presentations, but when they are interested they get engaged and might challenge you.

By the way others interact with them

Since they are very well respected, people listen when they speak up. Higher managers often delegate questions to them or ask for acknowledgement.

They can answer questions about business implications

As they are well connected, they usually have the bigger picture in mind and see how their work relates to other departments.

They know who to involve up the chain

Either they have a leading role or have informal channels to the top management.

How do you know if you’ve got the right champion?

You’ll know you’ve found a potential champion when you’ve got someone returning your calls or even proactively reaching out to you.

Someone who is actively discussing the next steps with you, sharing inside information and is even starting to get emotionally involved or sharing private insights with you.

Someone who gets you to other key stakeholders, who need to be involved in making the buying decision.

Someone who alerts you when things go wrong.

A word of warning…

Just liking you or your product doesn’t qualify someone as a Champion.

To make sure you’ve got someone you can rely on, test their power and influence and alignment to their personal interest to make sure you have somebody “selling” on your behalf.

Based on my experiences, I can definitely say:

No Champion, no deal.

Without a Champion to help you drive your deal proactively, you won’t have the support you need to beat your competitors.

By making sure you identify and build multiple champions that guide you through the buying process, you ensure that you build the most solid base for your deal possible.

Get a Free PDF Version of This Guide

If you’re ready to boost your sales using the strategies listed in this post, then I’ve got something special for you:

A free downloadable PDF version of this very guide.

Free PDF: Get access to a free downloadable PDF version of this guide. Reference it anytime you want or print for daily use

How to WIN Customer Rapport

How Metrics Can Help You Create Value and Build a Compelling ROI
This website uses cookies to improve your experience. We'll assume you're ok with this, but you can opt-out if you wish.Accept Read More
Privacy & Cookies Policy
Necessary Always Enabled
Scroll to top