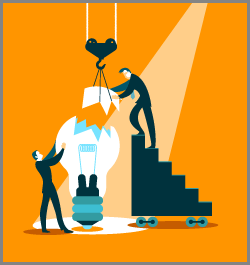 Here’s how the MEDDIC sales qualification process can help you hit a 90% close rate by keeping your focused on the fundamentals of a deal.

That was the year he became the first coach in any sport to win 7 national championships in a row.

He ended up leading his team to win a total of 10 championships in a 12-year period, with an unparalleled 88-game winning streak.

So what was it that set him apart from every other coach that came before (and after) him?

His unrelenting focus on the fundamentals.

No fancy plays. No hot-shot all-stars. Just knowing and practicing the basics of the game over and over and over again until his players had them down.

It’s a formula for success in just about any discipline.

And yet in sales, sometimes it seems like the opposite is true:

With so many factors account for in the B2B complex sale, many companies think that the more steps they add to their sales process, the more successful they’ll be.

But as many have found out, that couldn’t be any further from the truth.

The Key to Scalable Growth: Focus on the Fundamentals

Back in 1994, Jack Napoli was brought on by PTC as the 4th sales rep and the 32nd employee.

Within a short time, he helped PTC grow to 300 reps and about $300 million in revenue per year.

They hired more reps, generated more leads than ever, but weren’t able to significantly close more deals and scale the business.

So PTC’s CEO, Steve Walske, appointed Jack and his associate Dick Dunkel to dig into hundreds of deals to discover what set won deals apart from lost ones.

What did they find?

In every single deal that had been won, the sales reps had dominated in 6 fundamental areas.

These 6 areas were so clear, simple, and yet so powerful that PTC created a new sales qualification methodology around them.

Armed with this new methodology, PTC ended up tripling it’s revenue in just four years. Plus they became one of the first software-only companies worldwide to hit $1 billion in annual revenue.

The Power of Fundamentals

According to Jack and Dick’s findings, when sales reps used these 6 fundamentals to religiously qualify early in the process, they spent much more time on the ‘right’ opportunities.

So, what are the 6 fundamentals?

Together, those 6 fundamentals became the MEDDIC sales process.

And as long you focus the majority of your efforts on qualifying these 6 areas, the chances of your deal closing can shoot up to 90%+.

The Power of Simplicity

According to Jack Napoli, one of the reasons MEDDIC was such a success was the fact that the entire methodology could fit on the back of a cocktail napkin.

It was so lightweight and simple, sales reps had no problem integrating it into their daily lives.

These 6 fundamentals integrate seamlessly with the natural way people sell. They give sales people a kind of ‘reality check’ for their gut feelings. Plus, it allows them to discover blind spots and take corrective actions to drive their opportunities their way.

Compare that to overly rigorous, playbook-type sales processes that chain sales reps to a series of pre-defined steps. These processes not only feel forced, they leave no space for reps to play their individual, natural strengths.

Too many companies end up layering so many steps and so many details into their sales process, that they break their sales reps into process-driven executing machines (and not in a good way). They cause more confusion than clarity, and leave potential clients with the feeling that they are not really being listened to.

An effective sales process should provide reps with a set of qualification pillars. Pillars that help them understand:

That way, you end up with a process that is both:

Resisting the temptation to create a highly-sophisticated sales process with too many steps and implementing a process with a solid focus on the fundamentals, you actually enable your sales reps to drive more deals on a regular basis.

But as effective as MEDDIC is for qualifying winning deals, it’s still not a magic pill.

You still need to get the right sales people on board, and you MUST implement a strong discipline to continuously generate a solid pipeline.

However, MEDDIC will make a good rep better (possibly even great). Because it’s so lightweight and mobile, it’s perfect for coaching reps who are willing to compensate their blind spots.

That way, you can be on your way to your own record-setting career, just like Coach John Wooden.

Identifying the Real Pain: How to Effectively Qualify Your Customer’s Pain...
This website uses cookies to improve your experience. We'll assume you're ok with this, but you can opt-out if you wish.Accept Read More
Privacy & Cookies Policy
Necessary Always Enabled
Scroll to top